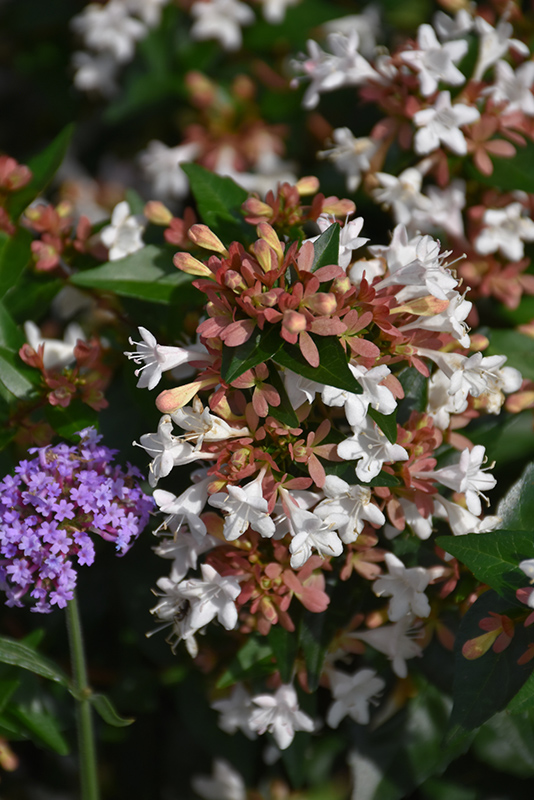 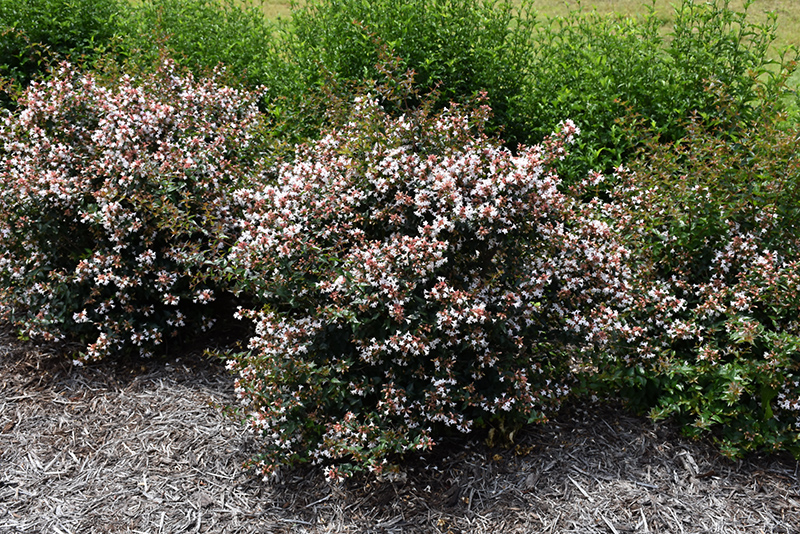 This attractive shrub has red tinged emerging foliage that matures to green, then red in fall; a mounded habit and trumpet shaped white flowers all summer, make it the perfect presentation for a smaller area

Ruby Anniversary™ Abelia features dainty clusters of fragrant white trumpet-shaped flowers at the ends of the branches from mid summer to early fall. It has attractive dark green evergreen foliage which emerges red in spring. The glossy oval leaves are highly ornamental and turn an outstanding red in the fall, which persists throughout the winter.

Ruby Anniversary™ Abelia is a multi-stemmed evergreen shrub with a mounded form. Its average texture blends into the landscape, but can be balanced by one or two finer or coarser trees or shrubs for an effective composition.

This shrub will require occasional maintenance and upkeep, and should only be pruned after flowering to avoid removing any of the current season's flowers. It is a good choice for attracting birds, bees and butterflies to your yard, but is not particularly attractive to deer who tend to leave it alone in favor of tastier treats. It has no significant negative characteristics.

Ruby Anniversary™ Abelia is recommended for the following landscape applications;

Ruby Anniversary™ Abelia will grow to be about 6 feet tall at maturity, with a spread of 5 feet. When grown in masses or used as a bedding plant, individual plants should be spaced approximately 6 feet apart. It tends to fill out right to the ground and therefore doesn't necessarily require facer plants in front, and is suitable for planting under power lines. It grows at a medium rate, and under ideal conditions can be expected to live for approximately 30 years.

This shrub does best in a location that gets morning sunlight but is shaded from the hot afternoon sun, although it will also grow in partial shade. Keep it away from hot, dry locations that receive direct afternoon sun or which get reflected sunlight, such as against the south side of a white wall. It does best in average to evenly moist conditions, but will not tolerate standing water. It may require supplemental watering during periods of drought or extended heat. It is not particular as to soil type or pH. It is somewhat tolerant of urban pollution. This is a selected variety of a species not originally from North America.

Ruby Anniversary™ Abelia makes a fine choice for the outdoor landscape, but it is also well-suited for use in outdoor pots and containers. Because of its height, it is often used as a 'thriller' in the 'spiller-thriller-filler' container combination; plant it near the center of the pot, surrounded by smaller plants and those that spill over the edges. It is even sizeable enough that it can be grown alone in a suitable container. Note that when grown in a container, it may not perform exactly as indicated on the tag - this is to be expected. Also note that when growing plants in outdoor containers and baskets, they may require more frequent waterings than they would in the yard or garden.